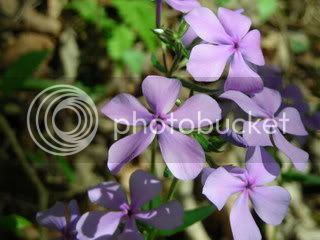 I've been expecting these guys to bloom any day now and they finally did. So, when I saw these babies along the backroad on my way to I 40 at Bucksnort I had to jump out and snap a few shots. They're called Blue Phlox; my favorite wildflower. Hey, even a man can appreciate flowers. Besides, I'm an outdoorsman; I'm entitled. There are more than 60 species of Phlox native to North America and by far Blue Phlox is the most abundant in Tennessee. Even its species name divaricata is derived from Latin meaning "widespread". The name Phlox comes from Greek meaning "flame"-due to the flowers' striking brilliant colors.

I usually like to have original, unique blog ideas and although phlox is very common, I think it's worth writing about because of its characteristics.

As far back as I can remember I've always associated this plant with spring. I can remember walking through the woods along logging roads while turkey hunting and seeing patches of phlox sprouting up above the dead leaves. It would stand out among all the drab brown understory; full of life while most other plants are still slow to peep out from under the leaves. Just like the daffodils who burst out at first hint of a warm spell, phlox takes advantage of this heat wave to do its thing. I'm afraid they too are in for a chilling surprise later this week when a cold front moves through projected to give us a few nights in the 30's. Oh phoolish phlox, won't you ever learn?

But it's that brevity that I appreciate. As well as the simple design. Five simple petals....
I reckon this is my version of giving a "stop and smell the roses" message. What's the moral of the Phlox story? Show up early-Look good- Keep it simple-Do your Thing.

A man that enjoys flowers and a woman that associates 'phlox' with the Denobulan medical officer aboard the starship Enterprise...I'm not sure which of us should be more embarrassed ;)

He was my favorite character just because of his name. :o)

I like Dr. Phlox, but my favorite (of course) is T'Pol. I can appreciate all the Vulcan emotion suppression :p

They look purple to me. Nice thoughts. Nice blog. I love your message to the masses. Keep it up!