As some of you know I am a member of the P&H hosted Tuesday trivia team notoriously known as Evil Petting Zoo. Each member is in their own way "EVIL"; my way just happens to be divining and channeling all things Tennessean as well as Roy Acuffian.
But another characteristic of mine would be I am a conservative....and EVIL conservative. I suppose that is redundant since all conservatives are EVIL by nature, right? Nature indeed!!-Mother Nature! I think this short video clip can sum it up for me:


But just to save some face, here's my attempt to help spread awareness of the soon to be end of mankind-Well, the LATEST impending doom at least: 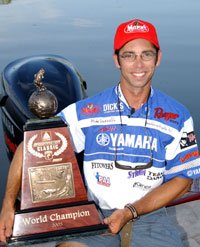 Looks like a normal, likeable guy doesn't he? Maybe a little too much on the nerdy side to be a professional bass angler? That trophy nearly outweighs him. Overall, a normal, probably low key guy right? 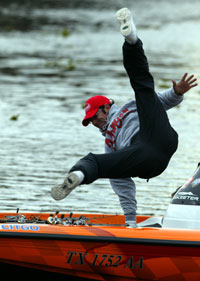 How about now? Oops, did he lose his balance? Perhaps a big wave caused him to shift his weight and he's bracing himself to keep from going overboard. Nope. He's breakdancing. He does it so much it has become his trademark celebration after catching a big bass. His name is Mike Iaconelli. He's the new face of what professional bass fishing has become- much to my dismay.

Mike is not your grandfather's pro fisherman. He is the embodiment of "unbridled enthusiasm." Breakdancing and trash talking to the bass he catches( in yo face, bass!) he has amassed a huge fan base and ESPN is LOVING IT!

Not too long ago I was a member of 2 bass federation clubs back home. It never was as glamorous as you might see on the weekend fishing shows. I grew up learning how to fish with my dad, my cousin, high school friends, and club members. We always practiced catch & release and we were often involved in efforts to clean up the shorelines along our stretch of Kentucky Lake. Some of the local guys were great fishermen who inspired me to try harder and learn as much as I could about the sport. There were even a few pros on tv who not only had an entertaining show they also made it educational. But ESPN has taken a laid back sport and with the help of Iaconelli turned it into a multi-million dollar entertainment circus...eerrrr bonanza.

ESPN bought(took over) the Bass Anglers Sportsmen Society as well as the rights to televise their tournaments and related shows. As a result the TN bass federation removed itself from B.A.S.S. and basically told them I think we should start seeing other people and joined another large, more conservative organization sponsored ultimately by Wal Mart. ESPN has done all they can to use "Mike Ike" as their poster child for the "new and improved" entertainment industry. Now, I know that today money talks and I don't blame ESPN for trying to maximize their investment in what is becoming an entertainment business almost as large as the fast growing NASCAR world( not to mention the overlap of fan interest). But, I do not approve of that "business" decision. It really grinds my gears to see that sort of behavior encouraged as an acceptable characteristic in this sport. A few weeks ago, during our fishing classic sale at my part time job(Bass Pro Shops) I overheard a young kid tell a Bass Pro staff pro angler that he'd love to meet Mike Ike. Mike was this kid's "Idol".

So that's what brings me to the question "Is it right to have an Idol such as Mike?"
I hope the next generation of bass anglers, professional and hometown alike, do not model their behavior after such "clowns" as Mike. It's bad enough the fishing entertainment world is already seen as a redneck past time. But what do I know? I'm just a small town, laid back guy who is happy enough just to get to go fishing anymore.
Mike, do me a favor, go back to the nerdy look. That's not near as embarrassing.
Posted by The Ichthyophile at 6/05/2006 08:58:00 PM 6 comments: