I went to the Titans' opening day game. Not much of a GAME though.
But here's a couple pics of the highlights of my adventure.

CAPTAIN Jack Sparrow...Titans fan? Or just some freak looking for attention? He spoke like the movie character as well as carried on flamboyantly as well. Hmmmmm.....

Thought this was a neat deal. Pregame 9/11 ceremony. 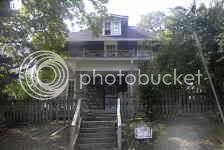 Welcome to my humble abode. I just moved into this house about 10 days ago. My roommate is a few years younger than me, a guy from my hometown and fellow UTM alum.
Built in 1925, this stone masonry house has a full basement which is curiously sealed off at the moment. It also has a 2nd story and a small attic. Last week I learned that there is an old lady living up there. My roommate, James, says he doesn't know much about her other than she works for Vanderbilt University at night and sleeps all day. Perhaps she is a vampire librarian? The only way you know someone is up there is when she shuffles her feet across the floor above my room early in the morning. This sounds like a job for The Bloodhound Gang! Not to be confused with that band of questionable lyrics and behavior.
Posted by The Ichthyophile at 9/06/2006 01:59:00 PM 2 comments:

Find Another Vein for This Runaway Train 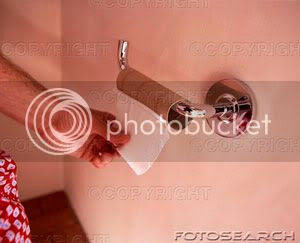 "O gluttony, it is to thee we owe our griefs!"
Geoffrey Chaucer

Don't you hate it when you get down to the last square? That moment of panic and anger you sense when you start cursing your spouse or roommate for leaving you in such a predicament instead of responsibly putting out a new roll. This country is headed down a track like that. Our country is a machine. A machine that runs on capitalism and oil. The world can be falling apart around the globe but as long as you and I can make it to work and pay our bills, eat to our hearts' desire, and go to the movies we'll keep on truckin'. $3 per gallon?
Well sir, I don't like it, but I've got to go. Go to work. Go to play. Go to Mcdonalds. Go run my jet ski all day at the lake. Go camping. See American. See American go....Go, American, go!

Ever since the automobile was invented we've had a need for oil. Everything we buy gets to the shelf because of oil. Without it, we're as helpless as we are holding the last square of TP in the house. And our suppliers know this. And we pay a hefty price for our drug. Our enablers?....Just look at the name on the back of your vehicle. GMC? Ford? Chevy? They've got that needle stuck so deep in our vein. And there it will stay until the last drop. Why pull it out now? They're greedy....no, they're lazy and shortsighted. WE are lazy, shortsighted gluttons. Why bother with new technology? Hydrogen power? Eh....that's too much work. Developing the plants, building the cars, who has time? I've got to make my tee time.

What we need now is another J.D. Rockefeller. Someone to step forward and put his money where our mouth should be....in our own back yard. The U.S. is the 4th largest oil producing country in the world. Not 4th largest USER....4th largest PRODUCER.
There's a technology out there that's been used since Hitler and the Germans developed it back in the 1930's& 1940's! It takes coal and converts it into oil. On an equivalent energy basis, the US has a larger energy resource base of coal than theOPEC nations have of oil. Here's the plan that's currently being sponsored by the CEO of JetBlue Airways. China's doing this. South Africa's doing this. Why can't we? Whatever opinion you have of our president, the war in Iraq, the middle east in general, you have to agree that we would be so much better off if we could be more self reliant with our oil needs.

Hydrogen power could be the future. Believe what you want about greedy oil companies like Exxon. Global warming arguements aside, oil is our drug. It's a hell of a drug, dude! I just dream of the day when we can tell OPEC "I think we should start seeing other people."
But most importantly... let's do it for the children.
Posted by The Ichthyophile at 9/01/2006 09:21:00 AM 2 comments: